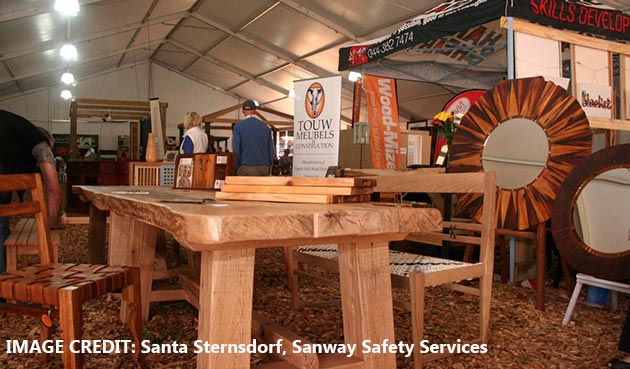 From total destruction in the fires of 7 June, to “most successful festival ever” in just three months: the 2017 Knysna Timber Festival (29 September – 1 October) has been hailed as both a triumph, and a cathartic, life-affirming experience.

“The Knysna Timber Initiative decided at its very first meeting after the fires that the Festival would go ahead by hook or by crook – despite the fact that both the venue, Timber Village, and my home and office – with all the Festival documents and records - were completely burned to the ground,” said Festival manager, Picca de Bruin.

“It was a massive effort, but the spirit of cooperation and the incredible support we received from everyone paid off on the day.

“Our visitor numbers were up (more than 2,000 people came into the festival grounds on Saturday alone); a number of visitors – including bowl-turners from Pretoria - flew in specifically for the event; the Fechters/Woodoc Food for Wood/Ezigro Karata Nurseries children’s programme was sold out; Chef Melven Mene of Usatsho Tshisanyama & Catering ran out of supplies on at least one occasion and had to go into town to get more to feed the amazing crowd of people who seemed to kuier and kuier; and the number of out-of-town exhibitors grew from about 5% of the total on show last year to 25% this year,” she said.

Ms. de Bruin said that media coverage generated by the Festival for Knysna as a timber destination exceeded all expectations.

“SABC sent a reporter and cameraman who put together a 2-minute, 11-second slot that was screened on prime-time TV news, and Derrich Gardner interviewed me on his RSG programme, Brêkfis met Derrich, on Saturday morning – and, together with exposure in Timber IQ and SA Forestry magazines, as well as in our local Knysna-Plett Herald and the many on-line publications that supported us, this year’s festival drew more media attention than any we’ve done in the past.

“In terms of the #KnysnaRises campaign, this was invaluable coverage, and we’re sure that we can directly attribute it to the goodwill that surrounded the Festival from the day we decided that it had to go ahead,” she said.

Exhibitor Cheryl Liepner of Country Ways – a Knysna-based business that restores furniture, and makes new furniture from old wood – wasn’t ready to exhibit at first. She and her husband, Nick, lost their house on the family farm near Karatara, outside Knysna, and their shop on Old Cape Road, and their son, Zak, lost his home next door to Timber Village in the fires.

“I couldn’t face it,” she said. “My biggest fear was that everyone would be talking about the fires, and we’re still trying to come to terms with losing everything – including all the stock from our 28-year-old business.

“But Daniel (Hennessy, one of the owners of Timber Village) called and offered us a sponsored stall, and persuaded us to come – and I’m so pleased we did.

“It was ten times better than last year, even though we had very little on show. It was just fantastic.

“We saw a very different crowd of people this year, and we did have to speak about the fire, but everyone was genuinely interested in our work, and how we’re rebuilding, so it was good to talk about it after all.

“And that genuine interest means so more than when people say things like ‘I’m sorry.’

“We were also positioned next to Barry Foulkes of Ciranova floor coatings from Cape Town, and it was fantastic to see and share his enthusiasm for wood and timber products.

“Losing everything in a fire teaches you not to become too comfortable. If I’d watched the farm animals, I would probably have known that it was coming our way, and made different arrangements – but now I know I must never get comfortable again.

“Nevertheless, the Knysna Timber Festival was a wonderful experience that’s helped us all enormously,” she said.  (All Ms. Liepner’s farm animals – horses, pigs, turkeys, and even a chicken with a damaged leg – fled the fires, but returned to the farm two days later.)

For his part, Barry Foulkes of Ciranova High Quality Woodcare Products – which exhibited for the first time at the Knysna Timber Festival this year – was “hugely impressed with the show.

“Whenever we exhibit in the big cities, everyone’s only interested in price – but here, we found that the people we met wanted to understand our products, and they were genuinely curious about what they can do.

“There was a such a great community spirit, too, and it was a rare opportunity to meet the local trade, and to speak directly to the people who make the decisions,” he said.

“We’ll definitely be back next year.”

And that, said Ms. de Bruin, was exactly why the Knysna Timber Initiative went to such extraordinary lengths to present the 2017 Knysna Timber Festival with the help of the Knysna Municipality and Wesgro.

“The festival’s slogan is ‘Our heritage rooted in wood,’ and its job is to remind us that we grow together when we work together,” she said.